Skip to content
Continuing story. Latest updates are below at bottem of this post.
Ju;y 2, 2011 Storm saga: The temperature was about 100 degrees Fahrenheit in the valley yesterday. Late afternoon I went outside and felt a few rain drops falling. I raised my eyes and arms up to the sky and silently said, “Thank you.” The vegetable gardens needed rain. It was too hot and I knew the rain barrel was near empty. I would be grateful for rain and lower temperature. Midwesterners in Northwest Wisconsin are not used to torturous heat. Besides, I have Lymn’s disease again and not supposed to be out in the sun for the next 21 days while on antibiotics. Instead of working I decided to walk down the street.

I can’t help it. I am an Earthy woman who loves and lives within the elements. My passion is gardening and butterflies. I am more at home outside than in and have always been this way since childhood. When it started to rain more consistently, I turned around and headed home.

I observed clouds coming from the south. They could be viewed at the top of the Minong hills and looked like an impenetrable wall. I puzzled why were the clouds so low to the ground? I didn’t feel alarmed in that moment simply curious. I did not know that something significant was about to happen. I walked inside the house and began to watch a Netflix movie in the living room. While spread out on a sleeping bag, all of a sudden the electricity went off. Loud groaning and tearing sounds mixed with high wind pitch. The sounds were beyond any beyond anything I had ever heard. I got up and walked to the only space on the main floor that doesn’t have windows.

There I waited in a darkened hallway. I felt and heard the bones of my aged redwood home creaking and moaning and knew that the structure was being tested. The high winds roared down the chimney. I could hear the wind in the attic above me. At the same time, some knowledge more ancient than I made me realize that I was protected by a healing blanket around me. I was not afraid. I felt secure in this thought. With my bare feet firmly placed on the floor I felt connected to earth. I reached for the water pendent necklace hanging from a nail in the hallway and felt the water totem would protect me now. I grabbed the necklace and put it on. I held onto it and knew matter how forceful the rain and wind were, I would be safe.

My Facebook friend Worth Cooley Prost had given me a glass pennant neckland as a gift. She creates glass water jewelry. Worth is immersed in ceremony before and throughout the creative process. Her Earthly role is honoring and loving water especially oceans. I have not met Worth yet. I know her through mutual water work. I am a council guide for the Sisterhood of the Planetary Water Rites headquartered in California. Women carry the responsibility of honoring the gift of water. It is a woman’s role to protect water. The Sisterhood was formed to embrace water and to teach others to be grateful for the gift. Water is not a commodity that can be bought, sold or traded. It is a gift. Women share the role so that we can protect fresh water for present and future generations.

Notes: Thoughts on losing pine trees and birch. Bonding with an adult monarch as I lightly held my hand out and she walked on my fingers to reach nectar. Precious moment. A few weeks ago, I saw a mother monarch lay eggs on milkweed in this colony. The property maintenance people mowed over it a few days later. I hadn’t protected it quite fast enough. I did see that some of the milkweed continued to grow and quickly, low fencing was bought. This time by golly, I was going to fence the colony off. Today I witnessed the first monarch caterpillar to survive in this very patch of milkweed. Last year, July 4, 2010, I lost my husband to cancer.

July 5 – My friend Janice Organ contacted me via Facebook  asking if she could help. Janice came today from Shell Lake. Both of us worked all morning to rake the back property and to pick up limbs and twigs. I feel so much better knowing that at least the open lawn areas are cleared of debris. 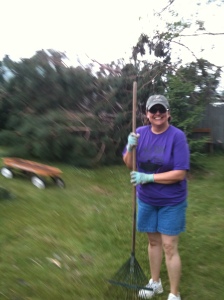 We had some transforming conversation too. Janice was able to see a mother robin teaching her fledgling to fly and also to pick juneberries ripening on a tree. It was thrilling to internalize the message. We all must learn to trust ourselves and fly. The old world order is becoming obsolete with deteriorating natural resources, diminishing world fresh water supply and humans being disconnected to the very natural world that supports life. What is needed now is to learn about sustainability of the changing environment and to find ourselves within the natural world order.

“Evidence of significant patterns of change over the past 10,000 years confirms that substantial ecosystem changes can occur as a result of changes in climate. Presuming future changes occur to the same extent as past changes, tribes that trace their ancestry to the wooded regions will slowly become overtaken by grasslands. Such that the entire nature of place for many Native peoples is likely to change.” Source: Climate Change Impacts on the United States. Chapter 12 – Potential Consequences of Climate Variability and Change by Schuyler Houser, Verna Teller, Michael MacCracken, Robert Goughs, and Patrick Spears.

The city crews came today to cut and remove some of the street laden fallen trees. I am grateful to them and the new Board members who are making sure that village residents are helped with the cleanup. It is massive. Did I tell you about Hoppy (sp) who works for electric company? He made sure after being three days without electricity that my neighbors across the street were given higher priority because my friend Henrietta needed oxygen. My roof and electric pipe on the roof are damaged so Hoppy made sure I had a temporary wire hookup so I too would have electricity now. What wonderful people who you can count on where there is a natural disaster.

July 6, 2011 – Grandmother Tonya Whitedeer recently published portions of this article in the July issue of the Sisterhood of the Planetary Water Rites Newsletter. She said, “Mary Ellen called me the morning after this act devastation…at first I was amazed at her bravery and calmness…but then I realized that she understands the prophecies and knows that we are in the midst of them now…these are the changes that are preparing for a New Earth to be reborn. If we stand in our Trust as Mary Ellen did and stand also upon and within her sacred space of Truth…we can all be survivors and teachers for our Mother Earth…AHO…. Grandmother Whitedeer