Here we are again in the land of natural resources.  I walked outside to look at an herb garden I planted several years ago when a resident pointed out a sleeping moth nearby.  Wow, it was a giant silkworm moth.  The beautiful Cecropia moth. (Hyalophora cecropia) was sound asleep and didn’t even know I was there.

The colorful rusty legs, feathery antennae and patterned body with bull’s eye markings are enough to dazzle a viewer. This particular Cecropia is taking up residence in Shell Lake, Wisconsin.  I wish I knew more about this beautiful species.

According to Wikipedia, differentiating between genders of this species is very easy. The most obvious difference is the plumrose antennae. Males possess a very bushy antenna while females will have  a moderately less bushy antenna. Females appear slightly larger in the abdomen due to the bulk of its many eggs. The abdomen of males appear more angular than that of the more rounded female abdomen.

Now the question is, is this moth male or female?  Look at this feathery antennae and yet the moth has a bulky abdomen.  I am guessing it is a female. 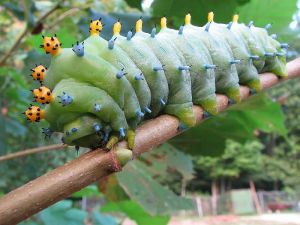 Be happy Insectamonarca friends where ever you are.