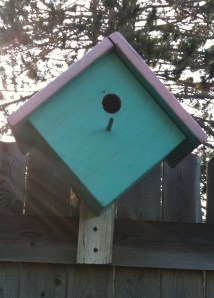 June 24, 2011 – After five days of rain, I was excited to get outside and see my gardens this morning. I am grateful for the rain. Surely it is helping to replenish the water table in Northwest Wisconsin. I walked over to one garden and heard a lot a chirping from a bird house. The parent birds have been flying in and out of the bird house for weeks.  Now I hear a lot of chirping from the little ones. I can’t imagine the size of the babies when I see how small the wren is.

Will be back later with National Bee Count totals. We were able to post on Facebook and received responses from MO, MN, WI and Nova Scotia so far.

Be happy insectamonarca friends where ever you are.

Butterfly Woman Publishing, is owned by the author. Books include "My Name is Butterfly" and "The Monarch Butterfly Coloring Book." 2014 "My Name is Butterfly" is now available as an eBook on Amazon. The book was also published in Spanish. My second book, "The Monarch Butterfly Coloring Book" was published in Spanish in 2014. Owner Butterfly Woman Publishing butterflywomanpublishing@gmail.com Former Executive Director: Happy Tonics, Inc. A nonprofit for environmental education in northwest Wisconsin. I retired and live in Saratoga Springs, New York, the home of my ancestors since 1856. My ancestry is from Ireland. View all posts by Butterfly Woman